From Indian Hill to Golden Hill

Before Anglo real estate developers set their sights on it, Indian Hill, as it was called in the early 1870s, was home to local Native Americans who lived in the then largely open land that is now known as Golden Hill.  The area’s journey to becoming Golden Hill involved both the displacement of the indigenous people who first occupied this space and the riding of the boom/bust/boom roller coaster of late 19th century capitalist expansion.

The early history of the Greater Golden Hills Precise Plan focused mostly on the extreme western slope of the area facing downtown and collapsed when the first efforts to build a transcontinental railroad link failed, which halted the development of San Diego’s larger business interests and its overall development. -Jim Miller 2013 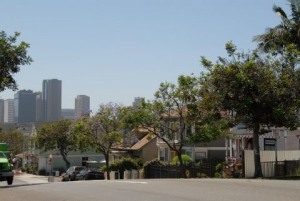 Other Golden Hills articles at: http://sandiegofreepress.org/2013/05/golden-hill-tis-a-picture-worth-seeing/

After reviewing the above article about the history of Golden Hills watch this amazing video of a musical bridge on 25th street .. give it up for crazy San Diego!