The Elfin Forest, which neighbors Questhaven and Harmony Grove, is not only great for hiking but also for delving deeper into the mysteries that surround this area. Like its popular neighboring communities, the Elfin Forest is rumored to be extremely haunted with hundreds if not thousands of stories and sightings to back up this claim.

The most popular myth is about the white witch. As the story goes, her husband and son were murdered out here a long time ago. Rumour has is she is still looking for her family, or possibly the person who murdered them. If you speak to the people at the Harmony Grove Spiritual Center, which is the area’s psychic village, they say that she finally found the light many years ago. They used to see her regularly but haven’t seen her for years. There are also stories of the Northern Diegueno Indians haunting these grounds. Upon hiking, if you’re lucky enough, you may come across mortars, metates, pictographs, and petroglyphs. 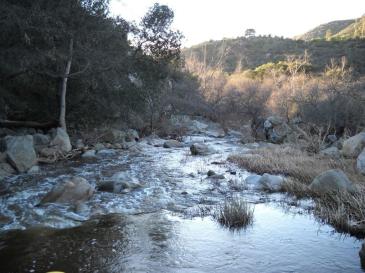 Elfin Indians: There has been a lot of evidence that Northern Digueno Indians lived in this area. Archaeological digs have found artifacts, mortars, metates, pictographs and petroglyphs. These primitive drawings have helped to further decipher the Uyman language, which was spoken more than 9,000 years ago. There are petroglpyhs which have been found on one man’s property.  Tours to view these ancient findings are occasionally held but you have to be in the “in” to be part of them.  It is believed that the symbols found in this area are tied into other similar drawings which have been found in Escondido, Hemet, Borrego and Rancho Bernardo. They were once used as navigating symbols.

Sources suggest that the Elfin forest and its surrounding areas were a meeting ground for many tribes and that these grounds were said to have good energy. One must wonder what went wrong for a once peaceful meeting-ground to now be rumored to have dark energy.

The Campground:  During your exploration of this area, you will begin to notice an abundance of debris and ruins from days long ago.  Much of these ruins are from what used to be known as the Elfin Forest Vacation Ranch. In 1959 developers purchased 97 acres and began creating from a beautiful vision. This vision came complete with a lake and dam, a grocery store and spaces for trailers, campers and mobile homes.  There was boating, fishing, movies, dancing and many great memories were created. Heavy rains in 1978 washed away the lake and swept away much of the ranch though.  Since then, what was left of the ranch has slowly continued to waste away.

Personal Experience:  I haven’t had anything crazy happen to me personally in the Elfin Forest.  I have had friend’s cars get totaled or broken down mysteriously which are the same types of stories that happen in the surrounding areas of Questhaven and Harmony Grove.